Yes, we have no bananas

It was bold, it was big and it was totally bananas. Banning this tropical fruit from the north east town of Portsoy boosted tickets sales for the Scottish Traditional Boat Festival.

How to dream up a new, highly creative campaign which would capture the imagination of press and public on a PR budget now a quarter of its previous total …. That was the challenge from the Scottish Traditional Boat Festival in Portsoy and we delivered on it … with a complete ban on bananas; a Portsoy Prohibition if you will. Bananas became a forbidden fruit in the seaside town - and the media and public loved it. Bananas were historically thought to be bad luck on board ships by superstitious seafarers, so in order to bring good luck to the 2015 Festival, we banned the fruit from the whole town of Portsoy in the lead up to the event. Tricker Communications even got Police Scotland - not exactly renowned for being a bunch of pranksters - behind the ban with the local bobby appearing in the photos.

As Aberdonians, cheap and successful are challenges we rise to frequently. In this case, we went bananas delivering more than 60 pieces of print coverage including a front page in The Herald and pieces in The Daily Mail, Scotsman, Scottish Sun and Sunday Herald. Broadcast included BBC Scotland, Radio 4 and TV bulletins. There were at least 435k digital views of the story and at least 1.75k shares. Online tickets sales increased during the campaign.

Happy clients, happy journalists and happy sponsor who was credited in 79% of all coverage.

But this was not our first foray into highly successful – and award winning - stunts for the Festival.  Giant knitting needles, illicit whistling and a flotilla of paper boats have all gained front page news for this top notch Scottish event.

“Well done: it's working splendidly.  Just had a fun interview on Radio 4. The nice thing is how very warm the response has been. Every year we get quite excellent support from you and your team, but I have to say that this year was quite exceptional. Despite having virtually no budget, you came up with an absolutely splendid theme, and as you know it created coverage across the world – and it was great fun!’’
Roger Goodyear, Chairman Aberdeen Asset Management Scottish Traditional Boat Festival 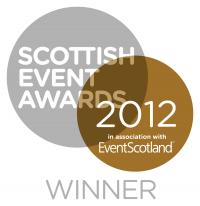