Who let the dogs out?

No, we’re not talking terrible 00s pop… as an office of animal lovers, we know how infuriating the process of drying a mucky pup can be after a day out splashing in puddles. So when we launched Dogrobes’s new camouflage offering, we knew they were onto a winner – and that the product had huge potential for media coverage and digital reach.

But, like with many small businesses, budgets were tight and we were set the challenge to deliver a low cost, high impact campaign that captured the dog-owning public’s imagination.

Such a request would leave some PR companies with their heads in their paws, but we’re well known for our dogged determination and we soon developed a communications plan which would, somewhat ironically, make this new camouflage product visible to the world.

Tying the launch to the Glorious Twelfth to appeal to the lucrative countryside market, and placing competitions in key publications, we soon knew we were barking up the right tree.

Digital and print coverage came bounding in from across the country. National titles like SLOAN, The Herald, My Weekly and The Countryman’s Weekly praised the camouflage dogrobes for their practicality and style, while regional titles like the Press and Journal, Worcester News and the Banffshire Herald echoed their howls of enthusiasm.

But that’s not the end of the tail…

Never ones to miss a pupportunity, we devised a competition to increase engagement with Dogrobes’ social media channels, encouraging users to interact with posts to win a camouflage dogrobe.

Packs of fans and newcomers to the brand alike headed to Facebook and Twitter to enter, and to engage with the fun campaign which saw users sharing images of their own pets’ (often hilarious) attempts to camouflage themselves. 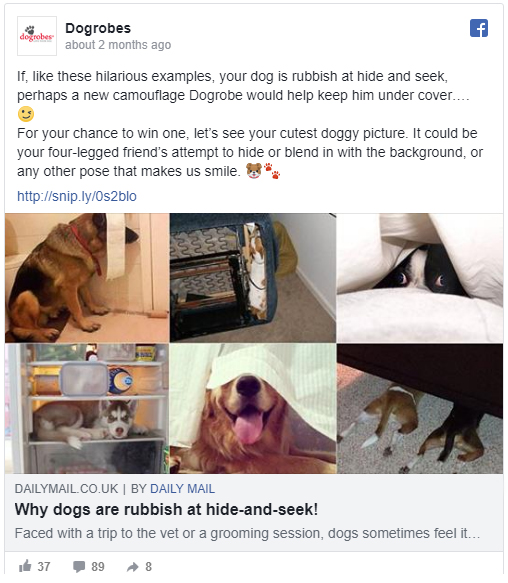 Throughout the campaign, around 10% of all website traffic stemmed from our activity. Users visiting the Dogrobes website from our camouflage campaign social media posts spent 53% longer viewing the site, and visited almost 50% more pages while browsing. Engagement and impressions levels were strong across social media channels, with tweet impressions increasing by a massive 134% on the period before our campaign began.