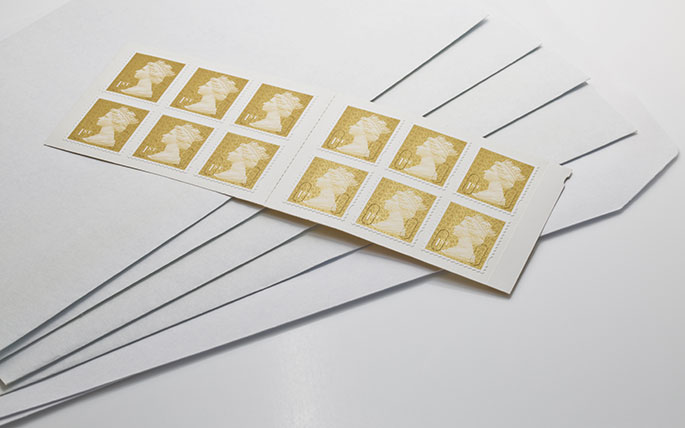 When it won’t sell you stamps it appears.

The first ten minutes of the conversation were taken up by explaining why their offer of putting ‘labels’ on each wasn’t an option (apparently if the Post Office uses a label on your package rather than a stamp, they are not permitted to give it back to you once the label is on it.) It took a while to get the concept of the stamped self-addressed envelope, which is put inside another envelope which is then posted, across to the teller – who was perfectly pleasant throughout the half hour long ‘conversation’.

Once we established that the label route was a dead end, I had the temerity to ask for stamps.

It appears that the post office just doesn’t like selling stamps any more. After much humming and hawing, it turned out that each package would need 3 stamps and the teller tried all methods (pleasantly) to dissuade us from buying stamps; including it would be ‘too much work’ for us to stick three stamps onto 35 packets. (At this juncture I didn’t want to point out that compared to glue-gunning 300 plastic yellow golf balls onto a yellow dress or making several thousand patterned paper boats for client campaigns, around 100 self-adhesive stamps was going to be a walk in the park.)

We made it clear that we were not fazed by the ‘massive challenge’ of 100 stamps and finally, after much raking through the ‘stamp book’ the stamps were finally handed over.

Time for a deep breath … “and can we also have twenty large letter stamps for packages of 150g”.

By this time we were thinking that the Perspex grill was in fact there to protect the prospective stamp buying public from the tellers rather than the other way around. We had calculated in the office that these should cost £1.27 each– and it turns out we were spot on. BUT, according to the post office this would mean AT LEAST seven IF NOT nine stamps ON EACH envelope. The Post Office clearly wanted to save us from ourselves.

In a great approximation of Groundhog Day, we were offered …. wait for it …. labels. To get a ‘label’ rather than a stamp, you have to give the full destination address. Cue explanation that we were being very organised and preparing media packs to be sent out in the future so that we could just write the address on the envelope and send out immediately.

So, the Post Office argument went, if we had the destination address, why couldn’t we just have labels instead of stamps?

But we don’t have the addresses yet we explained - and there was a terribly confused look on the pleasant post office worker’s face.

At this point the thought was going through my mind that Boots The Chemist allows me to buy cold and flu remedies when I don’t have a cold or the flu, to keep in the bathroom cupboard in case I get a cold or flu…. But I can’t buy stamps in advance of having an actual ‘live’ letter. The idea of a franking machine is growing increasingly appealing.

There was much flicking through pages of the ‘book of stamps’ and finally we were ‘asked’ to buy twenty stamps with a face value of £1.33 rather than multiple stamps to reach the value of £1.27.

By this time, we may well have ‘traded up’ even further and taken stamps of a much higher value just to get out of the building. So we settled for an investment in a further £1 in total just so we could get actual, physical stamps. In the time it took to buy the stamps for 55 letters, we could have – at the same counter – opened a bank account, organised a security industry authority licence to become a bouncer (!), obtained a fishing rod licence (who knew?), bought travel money, had our passport application checked and pre paid our funeral plans.

You see, we were only in the post office because the perfectly brilliant online Royal Mail SmartStamp system has recently been changed. No longer can you just print a ‘stamp’ on an address label and stick onto your letter. Instead one must input the recipient’s address and the sender’s address – which somewhat defeats the time saving purpose of window envelopes?

Fast forward a couple of days and a new contract involves us sending out 1200 letters by post. Wise to the rationing of stamps at the counter of the post office, we discover that you can buy stamps online from Royal Mail. But, guess what – they were sold out of stamps!

It’s your post office – use it or lose it but just don’t ask to buy premium bonds …. or STAMPS!